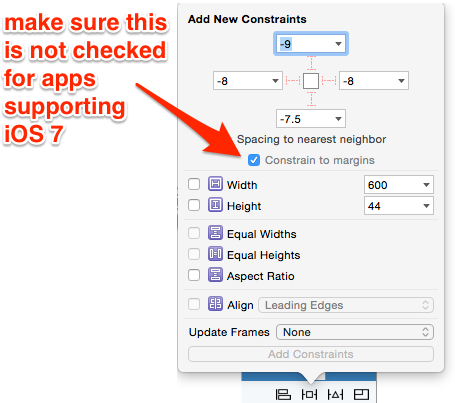 I’ve been reading iOS 8 by Tutorials from the Ray Wenderlich Team (get the bundle, they go into an awesome level of detail).  The first seven chapters are dedicated just to Adaptive Layout.  They frequently mention to “uncheck constrain to margins” so I got to wondering just what this little checkbox was all about.

It’s new in Xcode 6 and deals with iOS 8 specific features of auto layout.  Hint – if you’re supporting iOS 7, make sure you uncheck this.  Here are some informative posts I found on the topic (below).  And Justin, wish I heard about your Auto Layout book sooner – in addition to the RW bundle we just got another book just on Auto Layout, but even though it’s copyrighted this year it’s already a bit dated as it pre-dates iOS 8.  Still, we’ll have to check out your book soon. 🙂  I would suggest though you offer a sample, at least publish the TOC and specify which language (Swift, Objective C, or both) you use for your example code.  The RW books are all Swift-centric but they do provide Objective-C code samples in addition.

More on Constrain to margin:

What is “Constrain to margin” in Storyboard in Xcode 6

With a background in biotechnology, Fuad began his career developing assays and cutting edge technologies around HIV research. From there he shifted into the bioinformatics arena, where he developed innovative information systems in Perl. He started playing with the Flash platform around the time Flash 4 was released, and later developed the flash interface for the Flight Information Display System (FIDS) that you see at pretty much every major airport around the world today. Fuad loves delving into new technologies and pushing technologies in novel directions. Currently he is focused on providing mobile strategy & development for the Health & Fitness markets. He is an iOS developer, teaches an Android & Kotlin college course, and is currently writing The Kotlin Book http://thekotlinbook.com. Fuad has often applied principals he learned from his study of the martial arts to mentoring others as well as taking a unique approach to problem solving. He has found that quite often, the barriers we set before us are more mental than anything else, and the key to overcoming them lies in understanding this concept.